Guesthouse Runcini was born from the passion and love of Pier, architect and climber, who came here thirty years ago from Rome to climb … love at first sight with this ancient village, which he completed with Doda, giving it a new life.

The project to recover the ancient village of Gabbio has introduced arduous and unprecedented procedures to preserve its integrity, historicity and to make its units totally anti-seismic.

Doda & Pier in their old dwelling...

The chapel and the old village of Gabbio 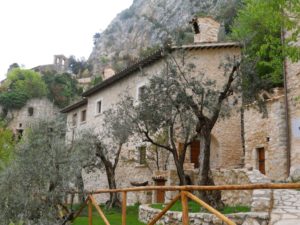 The Guesthouse Runcini is situated in an old medieval village, “Gabbio” that overbears the Valnerina and the underlying community of Ferentillo.
The units are at the beginning of this old village and the road that runs through it is part of its structure.
The rooms are lodged internally of these completely reconstructed stone houses, maintaining the warmth and the history of the various elements with whom they were built and that have characterized them over the years. Tower house, Dama house and Stone house are names that were given to the houses in order to marl: the differences between one and the other. In each of the houses there is a space available including a distinctive well-equipped kitchen and places were one can comfortably relax while watching a movie. Each room has a private bathroom.
The “stone’ itself has generated the name and the colour that the rooms are decorated in. The space is equipped with characteristic items that give our guests the possibility to feel at home. The area around the houses has a nice terrace with a lawn and olives where one can enjoy the environment and immerse into nature.

The pre-Romanesque village of Gabbio (from the Celtic ”Agobio’, meaning ‘place of encounter’) is only a few minutes away from Ferentillo, in Valnerina, in the green Umbria and is situated in a predominant panoramic position in a particularly mild climate. Due to it’s peculiar position the village was of great importance until the XI century.
For the whole period from XI century until the XII century Gabbio was a place of transit and control of merchandises from and to Spoleto. Together with the asserted power of the nearby abbey of San Pietro in Valle, Gabbio grew in it’s military importance of which the remains of the strengthened walls with loo’pholes, courts, arches and the ruins of the towers, testimony. 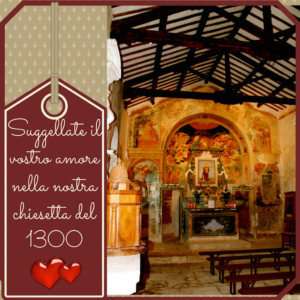 The fortified centre that surrounds the higher part 0f the fraction might go back to the XI century, in conjunction with the remains of the Saracen even though some believe they are pre-Roman and Roman findings positioned upstream of the populated area in the immediate nearness of the recently opened climbing cliffs. The internal alleys, crossed by winding narrow streets formed by stone staircases, are overtopped by a series of arcs in a row until the end where the community well is situated, the church and the doorway towards the other fractions of Nicciano and Loreno. The street in the middle of the forest conducts directly towards the territory of Spoleto, to the stronghold of the barons Ancaiani and the namesake village, the nearby Ancaiano. The great tower, once rather strong and imposing, inserted into the degrading walls of towards the valley. was developed as a check point as well as for the ditch as for the path of the valley, more beneath it is possible to see a tower from the XV century built on the rocks. The following buildings that one encounters at the entrance of the village were developed after the half of the XIV century and follow the flow of the internal road. On the left of the houses, after an arc, we can see the ancient community oven, derived from the remains of the square bastion embellished by two half-moon windows. The surrounded wall finishes with a door, once square of shape, placed to the extreme end of a pass. The village is crossed by one main road only that connects to short deviations and alleys that run to the furthest houses. Two doors confine the true and real fortress. The Saint Francis Way passes through Gabbio from the part of La Verna (Abruzzo) all the way until Poggio Bustone (Rieti) through Tuscany, Umbria and basic, an important curiosity for the comeback of the paths and the tourist- religious itineraries of Valnerina.

A demonstration video and our history